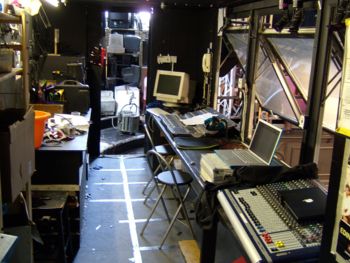 This is the domain of the Techies and it contains the Amps, Sound Desk, Lighting Desk and other assorted stuff. Technically (ho ho) we shouldn’t store anything on the top of the tech box but it is quite a useful place so just try to be careful with it. You can walk on the top of the tech box but try to stand on the beams. The panic alarm is connected to the white boxes along the front of the tech box and will flash red if it' activated. If this happens run down to the box office to help them. These boxes flash green for normal phonecalls.

There are lots of cool and shinny things in the techbox

As you enter the techbox from stage right, under the desk is a power transformer that powers the intercoms, doorbell and panic alarm see communication

On top of the desk is the Lighting Desk including central unit, monitor, keyboard and the faders.

Behind the lighting desk is a whole load of boxes

The techbox was built bla bla bla, Floor was instaled to stop people falling blab bla bla funny story, we all laugh -this should probably be done by someone that was around at the time. Helena then repainted the techbox in 2008. Good for her.

The Tech Box was recarpeted by Heather and Claire during fringe 2005. This made the tech box a lovely place top be for about 3 seconds before it got minging again. Seriously, it looks fab now, if anyone ever does it again they may find a happy letter under one of the tiles.