The balconies were a death trap, the floor was covered in sawdust but it's much better now. A clean up and comprehensive reorganisation between 2007 and 2008 has resulted in a much lower maintenance facility. That said, the Set Manager (responsible for it) needs to make sure it stays tidy.

The wall beside the organ gallery was built in 1989 at a cost of £3000 after being told we needed it by the fire officer. The first EUSA knew about it was when the bill arrived, needless to say they were unimpressed. This is part of the reason we have a finance agreement with EUSA.

The woodwork of the organ gallery is not structurally sound and shouldn't have stuff hung off it. 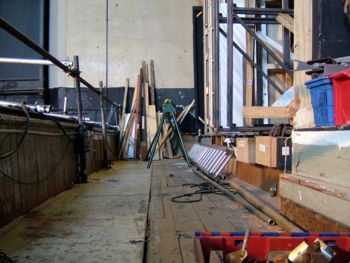 Scaff can be found under the boards on the stage left balcony, people shouldn't cut up the long bits. Bedlam has a decent but slightly out of date collection of clamps and two scaff keys, one of which tends to live in the end of one of the bars at the top of the ladder. (One of these is now lost the drainpipe on the right of the main door thanks to a mook in fringe 2002).

The scaff legs are kept under the first trap door when you enter the balconies on the stage left side . They should be taped up in groups of four and should not be cut as they are useful lengths for theatre conversions (they will probably have 'Skinnydipping' written on them).

The flat store was built in 1999 and more in 2002 and moved to a new location adjacent to the Techbox on the stage left balcony in 2006. It was moved to it's current position over Christmas of 2007. It just about holds all our flats upright, including the 13’ tall flats which were created for use in the Lyceum, they are useful for people who do shows in the Pleasance theatre. Although carrying them across town is fun.

The carpet store is behind the steps leading down to the scaff store. There is a nice big persian-looking carpet in there which may or may not smell of sardines.

This balcony stores most of our set pieces including cookers, chairs, tables etc. In 1989 the university fire officer decided that we shouldn't store anything up there, the place was gutted and he came back and okayed it, since then the crap has built up again so it' probably a matter of time before they complain again.

In terms of the set stuff you need to bin lots a couple of times a year, no one should add to it without asking you but it still fills up without you noticing it. Try to be brutal, keeping stuff because of sentimental value is not a good reason but that' why a lot of it is there so try and get someone else to do it who has no emotional attachments. A no sofas ban is currently in place just due the space they take up but it is up to you. Cutting them in half with a fire axe is very satisfying.

Built in 2008 by Ewan Connor and Alex 'Mal' Mead it is the stomping grounds of the Tech Manager. It is located at the end of the stage right balcony (next to dimming) and consists of a bench and shelves for repairing broken stuff and storing the parts to fix said broken stuff (which tends to be mostly lamps and extension cords). It also includes the lamp cupboard and boxes for domestic bulbs and fittings. You are also likely to find one or more projector mountings and the 4 floor parcans.

This was also (re)built by Mal and Ewan in 2008 and can house all of the lanterns Bedlam owns. All the bars are clearly labeled and there is also a bar labeled F.U.C.T. (Failed Under Consistent Testing) for broken lanterns. You can also find various fluorescent light tubes inside the scaff that makes up the store.

There are two water tanks on the balcony, a large one under the wood store which feeds the toilets and a small one which feeds the heating boiler which is high up on Stage Right. The heating tank makes all kinds of funny noises when the heating goes on and off. For some reason these noises scare actors at 1am.