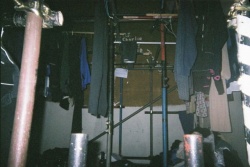 Costuming tends to be seen as pretty exciting and dare I say it even glamourous by people who don't sew or costume anything. In reality (or in Bedlam rather) it is just like any other job and requires a large amount of work. In my opinion the end result can be fairly fabulous and it all pays off. Here are some tidbits about it I suppose.

The Way to Narnia 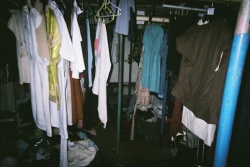 Otherwise known as, the costume cupboard itself.

People who are overly concerned with safety/fire code tend to pretend that the costume cupboard does not exist. Directors go into it enthusiastically searching for bits of costume or props and come out after a few minutes with nothing, ranting about how messy and disorganised it is. Actors know it is there, but have no idea what it looks like and have only a vague idea about where it is located. Former wardrobe managers generally refuse to enter it at all. Techies don't really give a shit about it unless something goes wrong with the lights or they get roped into helping move stuff around (although Alistair Marshall is gung-ho about installing a hammock on the top floor). People who have been around for a while will tell cynical stories about the various old Bedlamites who have had sex in it. Most people are afraid of it, either because it is creepy/haunted or because they consider it unsafe.

Basically the costume cupboard in Bedlam is the area above the dressing room, behind the stage and organ loft. This is a very tall room when empty, however it has been built up into three levels with a scaff structure and wooden floors by some people in the early 1990s (I believe). The top floor was rebuilt in 2003 under the jurisdiction of Miss Victoria Tills. This scaff should be tightened regularly before theatre license inspection. The entire structure is not earth bonded but probably should be. The cupboard is accessible via a spiral staircase to the left of the dressing room. There is also a second "exit" for fire reasons, which is a square hole in the floor on the opposite side (above the exit corridor on the right side of the dressing room) over which a very large and heavy metal plate has been placed. Technically a trapdoor could be installed here and then it would be a usable fire exit but there aren't enough people ever in the place at once to justify it. There are four lights in the costume cupboard which take 60- or 100-watt Edison screw lightbulbs but the plates need a screwdriver or leatherman to be taken off. There is a pulley thing attached to scaff on the top floor with no rope in it, presumably to bring up costumes from the bottom floor.

Props are stored in racks, on tables and on shelves. Costumes are hung on rails which are cable-tied to the scaff structure, the rails being broom handles and other scrap round wood of varying lengths. It is generally agreed by everyone that the rail system is terrible and that a better solution ought to be found, however, none of the people who say this have ever come up with anything better. Non-hangable costumes are in boxes on the floor. Shoes are in organisers on each floor. Excess material for sewing and construction is on a rack on the top floor.

The bottom floor is used for props and is bigger than the top two floors. There is one window at the far end, by the bookshelves. To the right of the entrance there is a structure of large plastic racks that can be pulled out like drawers, for miscellaneous small props. There are also tables although no one has ever actually seen them due to the large number of props under which they are buried. This level is also sometimes used for costumes in transit, which have been used by shows and need to go upstairs or vice versa. In the rough middle of all of this is a red staircase which leads to the middle floor, which is used for womenswear currently- dresses to the left of the staircase, everything else to the right. The stair comes up through a hole in the floor of this level, it has been suggested to me that a banister of some type ought to be put round this but that seems ridiculous to me since you just need to avoid falling in it and you will be fine. On the opposite side of the staircase hole, there is a platform on which bedding and pillows are kept, and you can get to the top level by climbing a scaff ladder from this platform. Top floor (menswear and fabric) is very tall and tends to be the cleanest because people who get tired of carrying clothes dump them on the bottom two floors.

The entire place should be kept locked at all times. I don't know who has keys but definitely the wardrobe manager and theatre manager do. 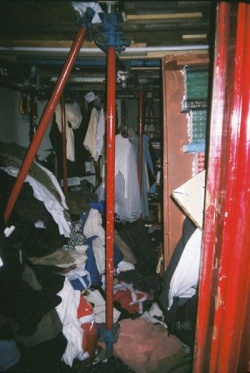 Not just the title of a lukewarm Ephron comedy which largely failed at the box office and in the press despite the hefty late-nineties name-recognition factor of its headlining stars, this is a section which is about Hanging Up Your Clothes.

I used to believe that everyone learned to hang up their clothes from an early age; perhaps not an enjoyable task, on par with doing the washing up or making one's bed, but a necessary one. It is the sort of thing that one learns to do and may then choose to ignore in the privacy of the home if one likes, but while in someone else's property or after borrowing someone else's clothing surely the admirable thing to do is pick up a hanger and use it. THIS IS NOT SO. In fact, no one who has ever been in the Bedlam costume cupboard for any reason has ever learned to use a hanger so it falls to me I'm afraid to teach them.


Supposing this fails! And the item of clothing drops off of the hanger and onto the floor.

4. Do not walk away and pretend you cannot see/hear the item dropping to the floor. Just because you hung it up once does not mean you have done your bit and what happens to the item next is the wardrobe manager's responsibility
5. Fix the problem. Some helpful hints:
- Some hangers are just for coats/shirts/dresses, these are your standard default hangers. Some hangers have little squeezy bits on the ends, these are trouser/skirt hangers. There are plenty of both so there is no need to mix their functions.
- Sometimes dresses have loops of thin ribbon attached to the inside of the shoulders. Like a bra strap, but don't wear them like that because it is the sort of fashion faux pas only forgivable in six-year-old girls. Confusing, I know, but these are specifically used to hang the dress on a hanger if the sleeves are likely to slip off. Use this feature well, for it is well-thought-out and works.

Rules of Hanging Up Your Clothes:
1. DO NOT hang jumpers and cardigans (or other things made out of wool-type material) up! This will stretch them. You can use that rule in your daily life as well as in the costume cupboard. Instead, fold them and put them in the appropriate box.
2. DO NOT use wire hangers. I hate them and am trying to phase them out, which will succeed if you never bring another wire hanger into the Bedlam ever again. They lose their shape and are useless for hanging anything heavier than a handkerchief, and they wreck the shoulders of your clothes. So just don't use them, plastic ones are lovely.
3. DO, if you find you physically cannot hang something due to the nature of the item, feel free to fold it and place it somewhere near where it's meant to be, where I will find it and put it away properly.

Things that the Costume Cupboard Needs/Wants

If you have any of these things, let me know. I'll update as I purchase.