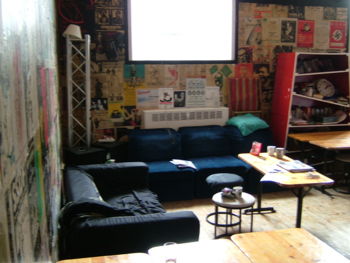 The servery contains two fridges, a freezer, a large chiller cabinet, microwave and a really posh coffee machine. The fridges need frequent cleaning because although nothing is kept there they still get smelly. The freezer should be defrosted a couple of times a year, it’s really only useful for the fringe so might end up being disconnected through the year. The Chiller should be cleaned out at every work in and the person running the café should make sure to open the doors and switch it off every night.

A panic alarm was installed into the café under the till in 1997. It connects to the panic alarm in the box office. The alarm sits underneath the till (the little grey box that has a red light on the front)

To activate, push the button underneath/on the bottom of the box and the red light should turn on. If the light turns on, on its own and a buzzing noise is heard then the person in the box office is panicking (you might want to send some spare people out to help them)

The coffee machine is great in that it makes good coffee but the coffee is a lot more expensive than the instant we used to use and so it’s use should get closely monitored by the FoH Manager.

The Cafe is the responsibility of the Front of House Manager.

The cast of each show is required to clean the cafe as a component of their maintenance session.

The chiller should be cleaned out at every maintenance and turned off at the end of each night.

The fridges need cleaning regularly because otherwise they start to smell and it will shorten their lifespan.

The freezer should be defrosted a couple of times a year

No construction should occur in the cafe as it is both unhygienic and may damage it.

There must always be a fire escape measuring at least 1.2m wide between the doors.

If people want to put up banners make sure they are sensibly flame proofed.

The Café is not soundproofed from the auditorium and sound levels need to be strictly controlled whenever a show is on. The price of soundproofing has been looked into but it was decided that it was far too high (2k-4k). An attempt was made on our own in fringe 2004.

The café grills were installed in 1991 by G Sutherland Blacksmiths and they don’t make the café secure more to be a bit of a deterrent and stop company members helping themselves.

Some of the walls in the café are held up by the skirting board which is held on with gaffa tape so don’t remove it unless you’re planning on rebuilding the walls. This is quite a big job and needs to be well planned.

The floor was last sanded and re-varnished for fringe 2008 as were the tables in 2004. The stools were repainted and reupholstered in 2008. New stools were bought fringe 2004 but will probably all have been destroyed as they were cheap.

If you want to clean the floor properly, then we will need to hire in a floor buffer. Either that, or a lot of Nitromores, scrapers, a malfunctioning sander, and every Edinburgh-based bedlamite, as happened in Fringe '08.

The wall to the toilet corridor is made from chipboard. Probably 18mm thick. There was significant water damage visible when the cafe was renovated pre-Fringe in 2008. However, after abatement of the visible mould, the wall was judged to be sound enough to be left in place.

The wall in the servery to the box office is constructed from stone and is safe to bolt into.

The wall to the auditorium is very dodgy. This will be addressed pre-Fringe 2008.

The main sink in the servery is fed from one of the water tanks. Probably the one above dimming. There are stop cocks for the taps located under the sink. Simply turn the tap on and turn the tap until it cuts off. Though obviously be careful as you definitely don't want to unscrew it to far the wrong way. The stop cock for the handwashing sink is located next to the door to the auditorium about 7' off the floor.

The cold water supply pipe runs from the kitchen, along the wall of the corridor from the Cafe to the auditorium, through the wall of the Cafe, own the wall next to the auditorium door and down under the floor. It then runs across the floor and enters the servery from the East. It supplies the handwashing sink first, and then feeds into the main sink. An additional line runs down the back of the cabinets to the coffee machine.

The sewage line is handled by standard PVC piping like you'd find anywhere. The coffee machine has a dedicated line that feeds into the PVC piping under the sink.

"The café is 18ft by 16ft and has substantial space for publicity. The walls are covered with posters of previous shows, dating back to the 80s, when EUTC first took over the building. Drinks, meals and snacks are sold all day during the Festival, at prices significantly below the Fringe norm. We also have the opportunity to use the café as an exhibition space for local artists. The café is consistently busy, successful and ever so slightly boho acting as a focal point and meeting place for both performers and audiences."