Difference between revisions of "Workshop" 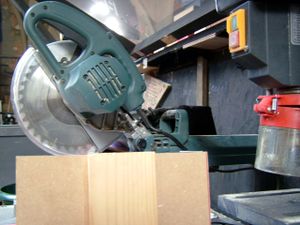 The workshop is, allegedly, where set and props and other stuff is built yet because it's so often full of set or just random crap (set) it doesn't get used for this and is instead used for storing random crap (set).

The workshop sprung into existence in 2005/6.

The workshop was tidied to the point of near usability over Christmas 2007/08 by Mal, Larking and some other good folks. There are now specific storage areas for plywood (both large sheets and small sheet) and more or less comprehensive system for storing the wood in a more or less neat and organised way. Plus, there's now loads of workbench space, new shelves, draws and so on. Lots of stuff was thrown out and 3-4 bags full of dust was removed. It felt good.

The floor of the workshop is clear as off January 7th 2008. Entropy will take over - shout at anyone that contributes to the chaos of the universe.

The hole in the floor was fixed on January 6th 2008. It's not super strong but should be fine. Don't push your luck. There's nothing beneath that section of the floor except the very thin plasterboard ceiling. Going through it would be bad. Do not be tempted. Honestly, it's more likely that the floorboards around the hole will fail before the plywood and it's supports do.

Future improvements will hopefully include more and better tools and most importantly: dust extraction. Yay.

The tool cupboard lives up here and contains lots of useful stuff, the trick I've found to keeping stuff from walking is to pick any unattended tools and put them in whether they belong to Bedlam or not, this way you’ve got tools and if people notice that their tools have joined the collective they can retrieve them. The locked FOB tool box lives up here as well. The tools must be signed out by the stage manager wishing to use them, and there is a checklist to be used when the tools are returned to make sure they're all there. Anything missing must be replaced or deposit cheques should be taken. This is a nice general supply of tools, so be really tough about keeping them in order.

The cupboard on the back of the techbox is a useful place to store stuff, it locks and only the key holders can open it if it were ever locked.

The wood store and workshop